A Plus Moving Group is a fully licensed and insured moving company located in Miami and has extensive experience with residential and commercial moves and storage services. Local or long-distance moving, our professional movers will take care of all the details to ensure your move is as stress-free as possible.

Our friendly and courteous movers take pride in delivering the best service, which is why we are one of the leading residential and commercial moving companies in Miami. Our team of professionals will work efficiently, effectively, and safely so that the property arrives at its destination on time. We have the best local movers in Miami, and they have years of experience in residential and commercial moves.

A Plus Moving Group is a dedicated moving company providing the best moving services in Miami City. Our team of experienced movers will make sure your relocation is seamless and painless. We will provide a free estimate to know what exactly our moving costs will be.

START YOUR MOVE:
*Your information will not be shared with third parties. We guarantee confidentiality.
Our Reviews
Brian
FromArlington Heights
To:Joliet
Very pleased with the work of A Plus Moving Group, from calling the operator to unpacking the last box. I contacted the company quite late, a week before I moved in. Based on my needs, the logistic manager picked up a car, the required number of people and evaluated the cost of the work. The crew came on time, everything was done accurately and efficiently, even added packaging for the fragile items I was talking about. They helped me with dismantling and reassembling the furniture, all work met the deadline that was expected. Thank you very much!
Kyle
FromCary
To:Charlotte
This is the most decent moving company I've ever hired, and in fact, my experience is based on 3 moves! The moving manager was on the phone the whole time, and the crew of three arrived 10 minutes before the appointed time. They worked calmly and neatly: took everything apart, packed it up, moved it neatly, assembled it, and even took out the trash! And the most important point - they didn't waste any time. I definitely recommend A Plus Moving Group!
Kerry
FromCatonsville
To:Annapolis
In September we had a long-awaited event - moving to a new house! Our family of 4 has a lot of stuff, including a piano, a cat, and lots of flowers. A team of 6 movers came to us, packed everything neatly, signed the boxes, for which a special thanks to them! The piano was loaded into the truck with a special hoist, the unnecessary items were sent to storage. Even with the contract and good reviews, I was most worried about the figurative and very expensive mirror, but all intact! It's hard to imagine how long we would have moved on our own. Thank you so much A Plus Moving Group!
Simone
FromSan Francisco
To:Los Angeles
I am so glad I came across A Plus Moving Group when looking for moving services for our corporate office. The team was top-notch from the start and was very efficient with their time. Their prices were almost exactly what they offered. I asked for extra services, like double packing and additional trash removal work, and they were always up for it. I insisted on movers with full-vaccination, and they made sure I got it. If and when I do another move to Los Angeles, I will not hesitate to contact APM. Thank you, guys!
Miami Movers

We have trucks of all sizes to help you move any household item within the city and state area.

We have been in business for six years and have a staff of 54 movers who are always professionally equipped to make the transition as smooth as possible.

We also offer packing & unpacking services if you are too busy to prepare your household items for transport.

Our staff will ensure that our customers’ properties are handled with the utmost care and consideration for their safety during the move.

Miami is the largest metropolis in the southeastern United States. It is located in the most populated county of Florida, Miami-Dade, on the coast of the Atlantic Ocean. The population is 454 280 people. The many beaches, clubs, restaurants, and fashionable stores attract partygoers from all over the world.

But Miami is not only an ideal city for fun, but also the most important financial and economic center of the country. It is here that international banks, large corporations, and famous recording and television studios are based.

Miami is considerably one of the most important cities in the United States regarding finance, commerce, media, arts, and entertainment, international trade, culture, and education. The Port of Miami is known as the Cruise Capital of the World and serves as a major transportation center for cargo shipping and passenger cruise lines. 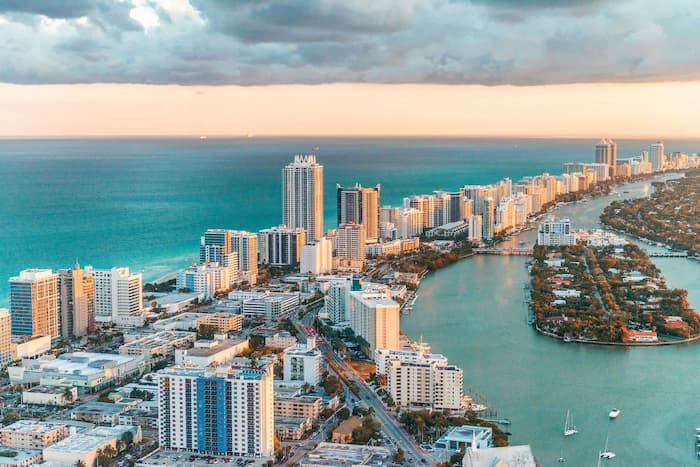 There is a lot to manage when moving out of the state or even locally. A Plus Moving Group will help with local moving services so that you can focus on the excitement and possibilities of your new destination.

We are a full-service moving company that handles everything from packing your boxes to loading them into our truck and getting them to your destination. Our staff members are experienced movers who understand how to handle delicate items such as antiques and furniture, so no need to worry about anything while we’re on the road. We even offer insurance options when something unforeseen happens during interstate and local Miami moving.

If you are looking for Miami movers, look no further than A Plus Moving Group. We take pride in our work and are always available to answer any questions you may have before, during, or after your move.

We’re all about being prepared, especially when you need to move out of state and have lots of things to pack and organize on a long-distance move.

When it comes time for a long-distance move, we’ll be there to help every step of the way. Our professional packers will carefully wrap and box your belongings so they stay safe during the long trip. Then our logistics experts will organize the relocation, considering any exceptional circumstances, like high-rise buildings or tight turns along the route.

Finally, while our moving truck is on the road, the customers’ properties are safe in our secure storage facilities. We’ll keep track of when they arrive, then call you with an estimate of how much everything will cost once they’ve reached their final destination. Make a call at (888) 448-5666 today and get your services done.