A Plus Moving Group is your number one most trusted moving company in Longmont, Colorado. Whether you are looking for a company with efficient service and professional movers or a moving company with a great reputation, then you are in the right place.

We at A Plus Moving Group have 6 years of experience in the business. With this, we continue to shape the relocation industry by introducing easy-to-understand relocation protocols. Furthermore, we offer competitive rates to all our clients as well as easy payment plans.

Most property owners are skeptical about how their fragile household items will be handled by the moving company. Fortunately, at A Plus Moving Group, we have experience in handling all your items. We have sizable boxes that can fit furniture, utensils, wall decorations, and any other fragile possession.

START YOUR MOVE:
*Your information will not be shared with third parties. We guarantee confidentiality.
Our Reviews
Brian
FromArlington Heights
To:Joliet
Very pleased with the work of A Plus Moving Group, from calling the operator to unpacking the last box. I contacted the company quite late, a week before I moved in. Based on my needs, the logistic manager picked up a car, the required number of people and evaluated the cost of the work. The crew came on time, everything was done accurately and efficiently, even added packaging for the fragile items I was talking about. They helped me with dismantling and reassembling the furniture, all work met the deadline that was expected. Thank you very much!
Kyle
FromCary
To:Charlotte
This is the most decent moving company I've ever hired, and in fact, my experience is based on 3 moves! The moving manager was on the phone the whole time, and the crew of three arrived 10 minutes before the appointed time. They worked calmly and neatly: took everything apart, packed it up, moved it neatly, assembled it, and even took out the trash! And the most important point - they didn't waste any time. I definitely recommend A Plus Moving Group!
Kerry
FromCatonsville
To:Annapolis
In September we had a long-awaited event - moving to a new house! Our family of 4 has a lot of stuff, including a piano, a cat, and lots of flowers. A team of 6 movers came to us, packed everything neatly, signed the boxes, for which a special thanks to them! The piano was loaded into the truck with a special hoist, the unnecessary items were sent to storage. Even with the contract and good reviews, I was most worried about the figurative and very expensive mirror, but all intact! It's hard to imagine how long we would have moved on our own. Thank you so much A Plus Moving Group!
Simone
FromSan Francisco
To:Los Angeles
I am so glad I came across A Plus Moving Group when looking for moving services for our corporate office. The team was top-notch from the start and was very efficient with their time. Their prices were almost exactly what they offered. I asked for extra services, like double packing and additional trash removal work, and they were always up for it. I insisted on movers with full-vaccination, and they made sure I got it. If and when I do another move to Los Angeles, I will not hesitate to contact APM. Thank you, guys!
Longmont Movers

Consider A Plus Moving Group if you are moving to Longmont. We are a Longmont moving company that offers efficient service.

We are also available 24/7 and never miss any deadlines. No matter how tight it is.

A Plus Moving Group is a company in Longmont, Colorado with expatriates and relevant experience. With 11 trucks and 54 packers, we will never miss the target time whatsoever.

Additionally, our expert moving staff will handle your household and office items with utmost care and precision. So, you need not worry about any damaged goods or property.

Our team has also successfully relocated hundreds of Longmont residents both locally and long-distance. You can check out the hundreds of positive reviews from satisfied customers.

Longmont City is situated in Boulder County, Colorado, and is 25 miles northwest of Denver. Boulder city borders the city of Longmont (to the North East), Broomfield (to the South East), and Nederland town (to the West).

Longmont city experiences a temperate climate. Thus, it is categorized as a semi-arid location. The best time to visit Longmont is either in spring or fall. The temperatures during these seasons are between 60◦F and 78◦F.

In this period (March-May), you could tour and understand the city’s culture and what it has to offer. In winter (December – February) the temperatures range between 18 and 35◦F. Among the top attractions in Boulder city include the Hoover Dam, Hemenway Park, and museums.

According to the 2020 United States Census, the city of Longmont was home to approximately 109,000 residents. Today, it is the 13th most populated city in the state of Colorado. 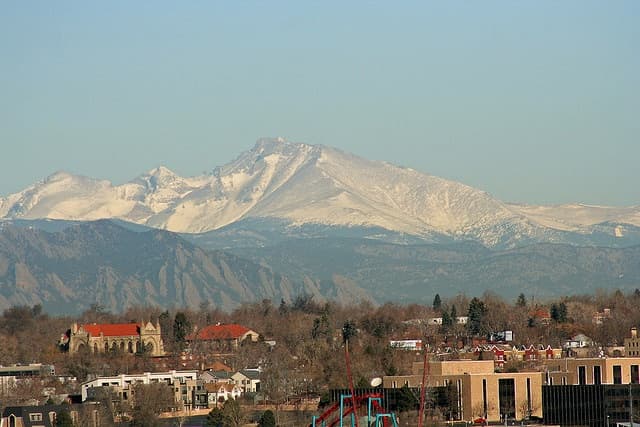 At A Plus Moving Group, we offer efficient local moving services whether you are moving from Fox Ridge Apartments to Hover Manor Apartments or further north to the Lakeshore destination.

For successful local moving, we assign full-size shipping trucks as well as adequate storage services to fit all your belongings. Additionally, our trained staff are responsible for packing and unpacking all your items.

Another thing, we do not have weight restrictions nor hidden charges as opposed to the available moving companies in Longmont. Lastly, there is an insurance policy that we strictly follow to protect all your property. Our team will be responsible for any kind of damages that occurs.

Moving Longmont residents should always find it easy to access any moving company. Fortunately, we are easily accessible and ready to respond to any client who needs our assistance.

With a vision and mission to make every long-distance moving a success, we continue to shape the moving industry each day. At A Plus Moving Group, our interstate packages are unmatched.

For instance, we have a moving truck which specifically designed to commute long distances, expert packers to cautiously handle your belongings, and sufficient storage boxes to fit all your fragile décor among other commercial moving arrangements.

Here are our three guiding pillars: quality value – we ensure that our services are standard and above your expectations; customer satisfaction – we serve you everything according to your relocation budget; transparency – we offer packing & unpacking services at no additional cost.